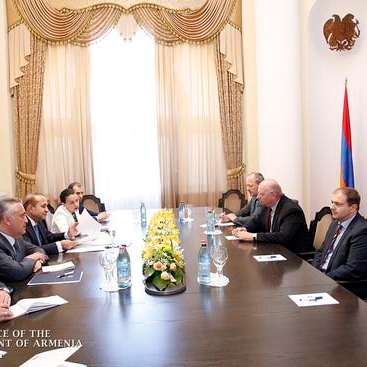 Discussed were issues related to the pension reform in Armenia and the new legislative package stemming from the Constitutional Court’s decision of April 2, 2014. The Prime Minister emphasized that by adopting a new funded pension-related legislation in the month of June, the National Assembly addressed the issues raised by the Constitutional Court, which in turn points to the Government’s firm determination to push ahead with the ingoing pension reform. As he gave the details of the newly introduced two-staged system, Hovik Abrahamyan said that at this point it will be mandatory for public sector employees whose salaries were raised as of this July 1, as well as for those entering the labor market for the first time.

The Premier advised that the new system will be mandatory nationwide in three years. Appreciating the recent amendments to the funded pension law, Ernst-Ludwig Drayss pledged his support for successful completion of the process. Both sides stressed the need for a continued public awareness raising campaign.

”Over the past couple of months, the new government held several meetings and consultations with the political parties represented in the National Assembly, non-governmental organizations and civil society. We will demonstrate our political will to bring the reform to successful completion,” the Prime Minister emphasized. Hovik Abrahamyan and Ernst-Ludwig Drayss reaffirmed their readiness to continue cooperating effectively in order to complete the pension reform and strengthen the public’s trust in it.

Statement on the current situation regarding coronavirus epidemic

On the occasion of the spread of the coronavirus epidemic (COVID-19), C-Quadrat Investment Group has taken far-reaching measures to ensure the full functionality of the Group and all subsidiaries at all times.

Read more
The company is not responsible for correctness and validity of the referred websites, for advertisements contained in those and possible consequences of use of any information published there.

The company is not responsible for correctness and validity of the referred websites, for advertisements contained in those and possible consequences of use of any information published there.

In case of any discrepancies between the two language versions of the published information, the Armenian version shall prevail.